When you have finished reading these stories ..... return to THE GATEHOUSE 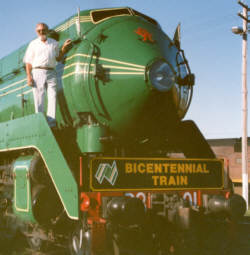 (An introduction by Brian Bere-Streeter)

My father, Walter Bere-Streeter, was born into a large family. He was one of four boys and four girls. His three brothers were named, Ray, Charles (Charlie) and John.

Most small boys seem to have a proudness thing about the work that their father did, but as my father was only a painting contractor, this didnt particularly endear him to me from this point of view. Ray was a bricklayer, and John was in the Army.

But, my uncle Charlie (seen in photo above) was a different kettle of fish altogether - you see - Charlie was an Engine Driver on the NSWGR. As every small boy wants to be an Engine Driver, Charlie was my hero. As a small boy, my love of trains grew steadily, and every time the family got together, Charlie and I would spend most of the time gasbagging about trains. Oh, how I wished my father had a real job like Charlies.

Ray and John have now long passed, and only a few years back my father passed away as well. After my father passed, Charlie and I maintained regular contact, and as we both lived in the Brisbane Metropolitan area, we had frequent train sessions with railway books, videos, DVDs, and sessions on Microsoft Train Simulator.

Charlie started with the NSWGR in 1947 (on my first birthday, as it so happens), and worked continuously with them till he retired in 1985, on his 60th birthday. Ironically enough, when he actually worked for the railways, he hated the work with a passion, because of the very hard manual work, the low wages, the constant dirtiness and the long hours away from family. However, since he retired, his love of steam locomotives grew solidly into his greatest love.

Now!!! Charlie was a real character  he had a very strong allergy to officialdom, particularly those of a pompous disposition. For this reason he took great delight in baiting those who he regarded as fair game, and as a result he became known amongst the hierarchy of the railways, as the bastard with a hyphen in his name.

Over the years, Charlie wrote frequently for the well known railway magazine Roundhouse, and also penned articles in other railway periodicals. Recently I had a discussion with him, and he has generously given his permission to me to re-publish some of his works, and place them on a website, so that other railway enthusiasts can get a glimpse of what it was like to work in the days of the real railway. His stories have a certain magic, written with gusto and humour that reveal the real background to driving trains in The Days of Steam.

All available Charlies works have been published here, and I hope that you will get a lot of pleasure and enjoyment in reading about life as a steam train driver on the NSWGR.

It is with great regret that I have to announce that Charlie lost his short battle with pancreatic cancer on Wednesday the 7th of January at Logan Hospital.

He will be greatly missed by all of his extended family.

With him has passed an enormous knowledge of 'the way it was' on the railways of NSWGR during the 50's and 60's.

'May the good Lord give you endless 'green lights' along the Main Line as you ride your beloved 38s into Eternity'.

Each of the stories below are formatted as Adobe Acrobat files, you will need Adobe Acrobat Reader installed on your PC to be able to read them.
The Mighty P

Recollections of an Engineman - Part 1

Recollections of an Engineman - Part 2

Recollections of an Engineman - Part 3

When you have finished reading these stories ..... return to THE GATEHOUSE